A “dish barrel” moving box (18″x18″x28″) can be used to good effect as a disposable cardboard garbage can.

It all started when Google decided links were a good way to determine relevancy on the internet.  Ever since then, people have been trying to get links in order to boost their search rankings.  To further this goal, people employ many strategies.  Some will “link bait” (encourage others in creative ways to link to their sites).  Others will just go buy links to their sites.  Some will resort to spamming, as well.

Arguably, there are two kinds of sites on the internet.  “Corporate” sites and “Non-Corporate” sites.  For the former, think Amazon, Newegg, Your local Pizza place’s website.  For the latter, think blogs, personal sites, etc.

Also, arguably, corporate sites don’t really do a lot of linking to new, valuable content.  Blogs certainly do.  Blogs link to each other, bloggers comment on each others blogs, and they most certainly link outward to useful corporate-style sites.

To “fix” this problem, Google’s solution is to promote the use of the “nofollow” tag.  The nofollow tag is a mechanism by which webmasters can mark HTML links as to be “not followed.”  In a world where Google treats “links” as “votes,” having a way to “link while abstaining” is important.  Google wants sites to put nofollow on any links that are paid advertisements (that aren’t editorially reviewed).  To enforce this policy, google has begun penalizing webmasters who don’t do this.

However, in their quest to promote the nofollow tag, there may potentially be some collateral damage.  For example, I’ve noticed that many blogs are now placing “rel=’external nofollow'” on all blog comments.  While this certainly makes sense, initially, it provides a disincentive to bloggers to comment on each others blogs.  What’s more is that the obsession with nofollow and the mistrust of anyone asking for a link could potentially create an environment wherein everyone uses nofollow except where they explicitly want to pass link-votes (google juice) to their own projects, their friends, or the few that pay them under the table.

If this happens, then two things happen.  1) the value of true links goes way up, further incentivizing those who will sell links and 2) there will be fewer GOOD links by which to classify good content.

Well, I don’t have a perfect solution, but I do have some good ideas.  First, I think that using REL attributes on anchor tags is a good way of doing this.  Second, I think that a spec update to robots.txt would work as well.

First, REL attributes.  Google’s current system is “all or nothing.”  Either you use nofollow, or you don’t.  A better system would be to come up with a number of attributes, such as:

These concepts could be combined for various meanings.  For example, “paid unreviewed”, “paid reviewed follow”, “reviewed nofollow.” I’m not sure if these are the right types of classifications, though.  For example, is it really necessary to say, “reviewed nofollow?”  Wouldn’t nofollow be enough?  I certainly think “unreviewed”, “paid”, and “paid reviewed” are valid classifications.

Overall, my point is this:  There needs to be more flexibility in
allowing webmasters to describe the value of the links on their sites.
NOFOLLOW is not enough. 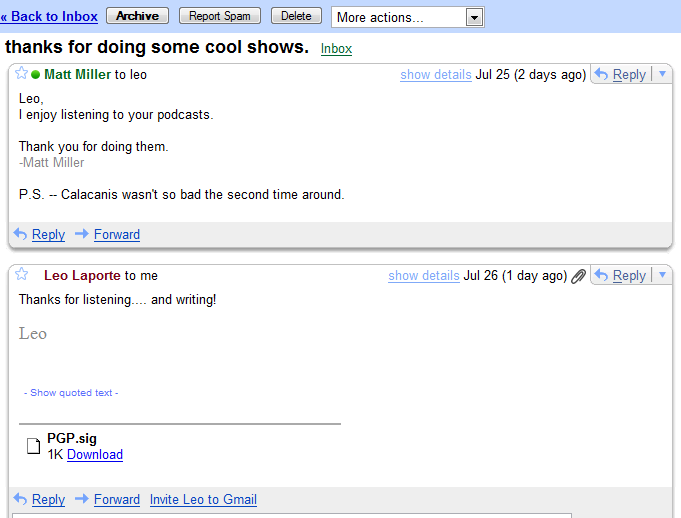 All it took was some open flattery.

Mahalo, I’m not sure I totally get what you’re doing just yet.  However, it seems to be really close to what about is doing, except maybe with a different take on how to go about it.

So, if that’s any indication, your results will rank well in google, and when I use google to search for things, you’ll show up high.  If that’s the case, please, please, please don’t be like about.

I really don’t like about.com, and I’d love it if they just dropped out of the rankings.  Their articles are usually low quality, and I end up wishing I hadn’t clicked.

When you’re building Mahalo, please, don’t be another ABOUT.

I kinda decided to go to law school so that I could say something like this and be taken seriously.